Reginald Maurice Cole was another of the young men born in England but living and working in the Shire of Alberton at the outbreak of WW1. He was born in St Ives, Huntingdonshire and both parents were still living there. He had his medical in Yarram and completed the enlistment in Melbourne on 13 July 1915. At the time he was 21yo. He gave his religion as Church of England. He was working as a farm labourer at Jack River, about 10 Km from Yarram.

His attestation papers indicate that he had served 3 1/2 years in 5 Bedfordshire Territorial Force in England before he migrated to Australia, suggesting that he could only have been in Australia for a short period of time. At the same time, he was sufficiently well-known in the district to be included on the Shire of Alberton War Memorial. He also received the Shire Medallion, at a farewell in Yarram in October 1915.

He left Melbourne for overseas service on 10/11/15. When he left Alexandria on 16/6/16 for the Western Front he was in 29 Battalion. He had had one run-in with military authority in Egypt. On 20/4/16 he was charged with and found guilty of … neglect of duty whilst on sentry duty: reclining on a heap of bags. He received 2 days field punishment No 2 for the offence.

In Egypt, there was a hospital admission for 10 days in May 1916 but there is no indication of what the illness or injury was. Then on 13/7/16 in France there is a reference to him being ‘wounded in action’ and ‘shrapnel’ given as the explanation. But there is no indication of any treatment or hospitalisation. In any case, he was still obviously on active duty when he was listed, one week later, as missing on 19/7/16. The war diary of the 29 Battalion indicates that he was one of 66 men missing.

The court of enquiry that determined he had been killed in action on 20/7/16 was held more than one year later, on 23/8/17, and the Report of Death of a Soldier was issued on 12/9/17. There is no family correspondence and therefore no way of determining when the parents learned of his fate. There was no grave and his name is listed on the memorial in VC Corner, Fromelles.

The only information provided by the parents was when they completed the information for the (National) Roll of Honour, where they gave Melbourne as the town with which their son was ‘chiefly connected’.

There is a detailed Red Cross report which highlights the confusion that so often surrounded the painstaking process of tracking missing soldiers. In battles such as that at Fromelles where the casualties were so great, the potential for confusion and error was correspondingly higher, precisely because there were so few men left to provide witness statements for the many missing or dead.

In the specific case of Private Cole there was a significant case of mistaken identity set in train when one informant – Sgt. F. H. Simpson 633 – suggested that the Cole in question was a sergeant who had been taken prisoner. He wrote to the Red Cross on 16/9/16:

This man is a Sargt and I think in D. Coy. I happened to see the letter he wrote to Lt. Stanton from Germany and have a list of men who were in the same camp with him…. I feel certain you will find Sargt. Cole is a prisoner.

There was a Sergeant Cole – Oliver Stanley Cole 1321 – who had been captured at Fromelles and who was a POW in Germany. It took several months to clear up the confusion with Private R M Cole 473.

At the same time, there were other witness statements that did have the right man but there was still confusion. Private Nash 303 wrote on 1/12/16 from his hospital in Boulogne, where he had been admitted with ‘chilled feet’ [trench foot].

Cole was in A.II and was wounded in the attack at Fromelles on July 19-20. We attacked at 6 p.m. and took three lines of trenches, but had to go back to our own line at 4 a.m. Cpl R. C. Adams of the same platoon, was with him, and told me that he saw him wounded in Fritz’ first line. He was left behind, and if alive must be a prisoner.

There was also another second-hand account that must have been closer to the truth. It was written a couple of months later by Pte R. Blake 173 – also recovering in hospital, from Trench Fever & Neuritis (severe)  in England – on 15/2/17. It certainly has the right Cole, whom the informant described as … a little dark fellow, Englishman from St Ives, Huntingdonshire. [According to his medical papers, Cole was about 5 foot 3 inches tall and of ‘sallow’ complexion.] Like the previous statement this one again relies on the memory of Corporal Adams.

While both statements rely on the testimony of Corporal Adams – one had Cole wounded, left behind and taken prisoner and the other had him killed – there was, unfortunately, no first-hand account by Corporal Adams himself.

Presumably, when Private Cole did not appear on list of the dead provided by the Germans and it was equally clear that he was not a prisoner of war he was effectively ‘signed-off’ as killed in action. This protracted process took just over one year.

note: Service Number for Embarkation Roll is 9, not 417

At the time of his enlistment in Kerang on 3/11/14 he was 38 yo which makes his the oldest name on the Shire of Alberton War Memorial.  His occupation was given as grazier, suggesting that at the time of enlistment he was living and working in the border region with NSW. However, there is other evidence also that ties him, at the same time, to the Shire of Alberton. His name appears on the local Presbyterian Charge and there is an entry for a D F Livingston in the 1915 Rate Book for land at Binginwarri. Moreover, his name appears on the Shire of Alberton Roll of Honor, on which he is recorded as having been killed; and as already indicated, his name is also on the Shire War Memorial.

He married – Lillie Maud Livingston – shortly after he enlisted and before he embarked for overseas service. His wife’s address over the time of his military service – and immediately after the War – was in Melbourne.

On enlistment he joined 8 Battalion but was subsequently transferred to 29 Battalion when this formed at Broadmeadows in August 1915.  He was in D company and was promoted to corporal on 25/4/16. His unit arrived in Egypt in December 1915, after the evacuation from Gallipoli, and then left Alexandria on 16/6/16 for France. 29 Battalion reached Marseilles on 23/6/16.

The War Diary of 29 Battalion indicates that D Company was heavily involved in the fighting at Fromelles, particularly when the Germans counterattacked very early – round 2 am – on 20 July. The fact that his identification disc was returned by the Germans suggests that Corporal Livingston was one of those who made it through no-man’s-land to the German trenches where he was killed. After the German counter attack early on that morning of the 20 July the front line re-established itself in the previous position. Corporal Livingston was buried by the Germans in a common grave.

The Report of Death of a Soldier for Corporal Livingston was issued on 13/9/16 at Rouen. This was a much faster time than for others killed at Fromelles. More surprising is the fact that the family was notified of the death even before this report was issued. There is a letter from Rev W. Borland of Scots Church, Melbourne – Livingston was Presbyterian – that shows he conveyed the ‘sad news’ of the death to the widow on 14 August 1916, which was one month before the official report was prepared. It appears that the cable of the death reached Australia on 8/8/16 and this was confirmed by mail sent from London on 18/8/16. Rev Borland made his visit to the wife about a week after the cable reached Australia.

The key point in this series of events is that even though Corporal Livingston was technically ‘missing’ – his body had not been recovered – the wife was advised that he been killed less than one month after Fromelles. The clue to the apparent inconsistency in procedure is contained in The Report of Death of a Soldier.  In the report there is reference to another form that carried notification of the death, and this form was completed on 21/7/16, the day after the battle. Unlike other ‘missing’ soldiers after Fromelles, Corporal Livingston was declared as ‘killed in action’ – and not missing or taken prisoner – immediately after the battle. There must have been strong evidence, presumably by way of witness statements from others in his company, to support the declaration.  To add to the mystery, there is a reference in Corporal Livingston’s file that has him buried at Fromelles.  Yet every other record points to the fact that the body was never recovered after the battle by the Australian troops and that it was in fact buried by the Germans in a mass grave, as it was presumably either in or behind their lines. Possibly, in the face of such staggering casualties after the battle and in the confusion of the first one or two days after, as various parties were trying to recover wounded from no-man’s-land and bury the dead, there was a case of mistaken identity. Whatever happened, there is no formal record of Corporal Livingston being buried by the AIF in an identified grave – his name appears as one of the twelve hundred and ninety-nine on the VC Corner Australian Cemetery and Memorial, Fromelles – and at the time he was declared ‘killed in action’ his body had definitely not been located. It appears that the earliest the Germans confirmed his death – they confirmed his death from his identification disc which they subsequently returned – could have been early August. The name was certainly on a German list of dead dated 4/11/16. It appears that the disc itself was returned earlier, on 12/10/16.

Corporal Livingston’s case points to the level of confusion surrounding Fromelles. His body was buried by the Germans in a mass grave and it was identified in 2011. Subsequently, Corporal Livingston was re-buried in the new (2010) Pheasant Wood Military Cemetery, Fromelles. 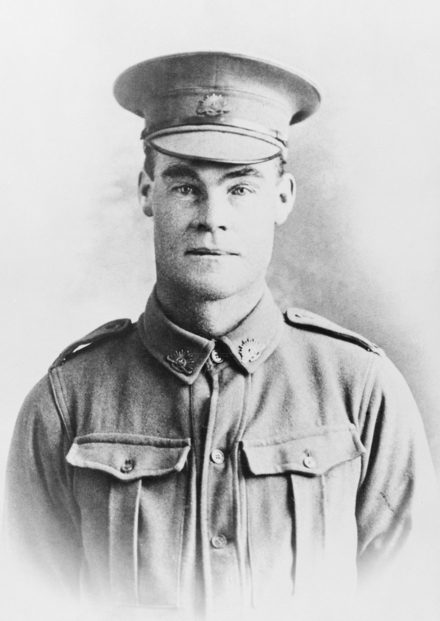 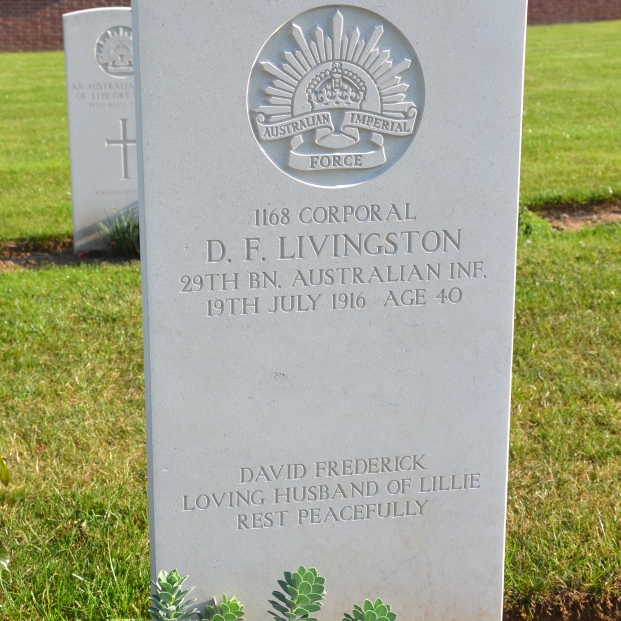