George Albion Cowley was nearly 39 yo when he enlisted in August 1915 (5/8/1915). Also atypically, he was married (Marguerite) with 4 children (Albion, Myra, Lindsay and Francis). He had attempted to enlist earlier but had been rejected on medical grounds (knee).

George was born at Cowley’s Creek near Cobden in the Camperdown area. On his enlistment papers, George indicated that he had been a member of the Pomborneit Rifle Club – near Camperdown – for nine years.

The family must have moved to Yarram some time before 1914. From March 1914, he was employed by the Shire of Alberton as the driver of the council’s steam traction engine. The local paper – Gippsland Standard and Alberton Shire Representative – carried a story on 23/7/15 of his intention to enlist. In it, he was referred to as a ‘local’. He was one of 6 local men given a formal farewell at the shire hall in late October 1915. This event was also written up in the local paper (27/101/15). After his death, there was a brief report in the paper (26/1/17) –  Gunner G. A . Cowley, well known in Yarram, where some time ago he was employed by the Alberton Shire Council, as driver of the traction engine, has been killed in action in France.

When Private Cowley enlisted in Melbourne on 5/8/15 he gave his permanent address as Camperdown. This was also the address of his wife and family when he served overseas. It appears that he must have moved back to Camperdown at the point he enlisted. However it is also possible that in the few years he worked in Yarram, for the Shire of Alberton, the family had remained in Camperdown. On the information form for the (National) Roll of Honour, his wife gave Camperdown as the place with which he was chiefly connected. At the same time, his name appears on both the Alberton Shire Soldiers’ Memorial and also the Shire of Alberton Roll of Honor.

On enlistment, Private Cowley joined 13 Light Horse and left Melbourne on 23/11/15. He reached France, via Alexandria, in late March 1916 and transferred to 2 Australian Artillery Division. He was then posted to 22 Field Artillery Brigade (19 Battery) in August the same year and was serving in this unit when he was killed by shell fire on the very last day of 1916. Various unit diaries suggest that while front line troop operations had effectively ceased at this point because of the dreadful weather, there were still ongoing artillery exchanges between the two sides. Although there is no specific reference in any unit diary to the incident in which Gunner Cowley was killed, eye witness accounts taken from Red Cross reports give a clear picture of what happened.

I knew Cowley personally, he was known to us as “George”. He was an elderly man, short and with a dark moustache. I saw him killed by the bursting of a shell, at a place we called “Turks Lane” at Flers. I saw him buried, myself being in charge of the burying party. Cowley transferred from the 13th Light Horse. Cowley was a married man with two or three children, I think a Victorian. He and Reginald Lindsay were killed by the same shell, and buried together at Flers.
Cpl J. Gartrella A.M.C. London. 15.6.17.

I saw them just after they were killed between Guedecourt and Ginchy at 5.30 on December 31st last. I was in a dugout five yards from the one used as Q.M. store. I heard the shell coming and heard it explode right on top of the Q. M. store. I went out at once. All the men in the dugout were dead. I helped to get them out and saw Lindsey’s body taken out. There were 3 others in the dugout and all were dead. Lindsey’s body was badly smashed. He must have been killed instantly. Cowley was just outside the dugout and had got a splinter through the head. He was quite dead. Next morning the other three men were got out …. I helped to bury the 5 together on the spot where they got killed. We put up a cross made of used cartridge cases (brass). It has the 5 names on it. Lindsey’s name is Reginald and he is a brother of Norman Lindsey (sic), artist of the Bulletin. Cowley’s name is George. He used to belong to 13th L. Horse. He talked as if he was a farmer. Came from Victoria. Age about 37. Married, and I think 1 or 2 children.
Gnr J. A. Dunn. 6937 Etaples. 8.6.17

[Reginald Graham Lindsay (11867), of the same unit as George Cowley, was Norman Lindsay’s brother. Lindsay was, at the time, political cartoonist for the Bulletin. He was very pro-Conscription.]

The family was advised of the death by cable in mid January 1917 (16/1/17). The body was subsequently interred at the Guards’ Cemetery, Lesboeufs, France.

The impact that the death of the husband and father had on the family is evident from the following letter written by Gunner Cowley’s mother on 19/2/17. She was writing on behalf of her daughter-in-law and the children. The letter was sent to Andrew Poynton MHR, a key supporter of Hughes and avid Conscriptionist. At the time he was a member of the Federal parliamentary recruiting committee. The script is hard to read:

I am writing to you to know if you could advise me how I may learn the full particulars of my poor sons death [.] We received a cable in January 16th.1.17 stating he was killed in action on December 31st .12.16[.] What the nature of the cause was not stated nor what part of France it happened [.] He was a married man with four little children & a dedicated wife [.] With no home of their own how they are going to manage I do not know as his wife never had to battle before [.] I his mother is also a widow & has to provide for myself that it is impossible to help her [.] So if you would kindly let me know I will forward your answer on to her [.] She is at present paying 8/- per week for the house she now is living in [.] She also has not been getting her full army allowance. I also sent my son a wristlet watch from Merino Post Office on December in the first week and registered it [.] It has his name engraved in the inside [.] It is G. A. Cowley from his mother [?] 4th.12.16 [.] I would like to get it back safe for his sake [.] Since the cable saying he had been killed we have heard nothing else[.]

[?] it is hard to bother you but it is harder still not to know the last of your boy though I am proud he did his duty for King and Country[.]

There was a reply (3/3/17) from Base Records to Poynton’s office indicating that that there was no further information regarding the death but that, hopefully, the next-of-kin – in this case, the wife – … should receive, if the stress of operations permit, a letter from deceased’s Commanding Officer or Chaplain, giving such details as are available. 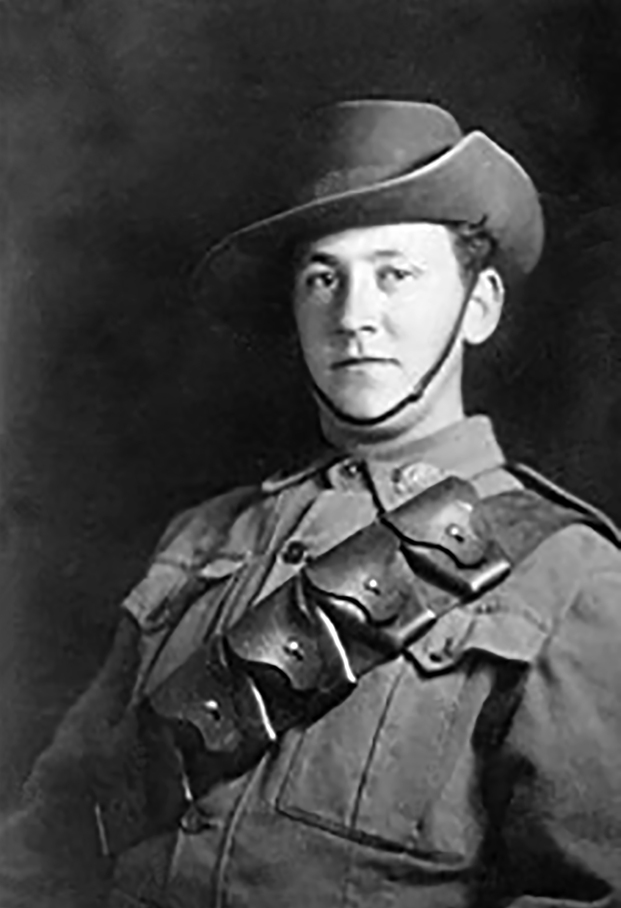