James Robert O’Day was born at Darriman. He came from a large family of 14 children. The family had been living in the Darriman area from the 1880s. His father – Samuel O’Day – was a farmer at Darriman with 45 acres.  During the War, the mother – Mary O’Day – was actively involved in patriotic fundraising for causes such as the Australian Sick and Wounded fund.

James O’Day attended the state school at Darriman. He belonged to the Yarram Rifle Club and he worked, as a grocer, at the Co-Op Stores in Yarram.

Private O’Day enlisted on 1/7/15. He had his initial medical at Yarram. At the time he was 24 yo and single. He gave his mother as next-of-kin and his religion was (Roman) Catholic.

He was given a formal farewell from Yarram in early November 1915. There were 2 other locals farewelled at the same time. The event was written up in the Gippsland Standard and Alberton Shire Representative (3/11/15). There were few townsfolk at the farewell so the speakers that day were critical of the perceived lack of interest in the young men’s patriotism and sacrifice. They were particularly annoyed that no clergyman was there. One of the speakers … remarked that it was a pity the boys were present to hear the discordant note. At the same time he felt the criticisms needed to be made. Private O’Day thanked those there for the farewell and his medallion. He promised that when he got to the front … he would do his best with the rest of them.

Private O’Day enlisted as reinforcements for 2 Pioneer Battalion. His group left Melbourne on 18/9/16, well over a year after he had enlisted.

On 19/1/17, the local paper published a very detailed letter that Private O’Day had written of his experiences on the voyage to the UK. One short extract gives some of the flavour. The theme about supposed ’equality’ between the officers and other ranks in the AIF was commonplace, as was the casual racism. When the boat reached Dakar, only the officers were allowed to go ashore.

When we got to Dakar the “heads” there would not stand us getting off. The officers were allowed off. We were anchored out in the bay about 200 yards from the wharf. A lot of darkies were around us in their little canoes, selling cigarettes and diving for coins. About 30 of the boys decided to follow the officers, who reckoned they had a right to go if the officers had. So they got the darkies to come in close, and they lowered themselves down a rope into the canoes and the darkies took them ashore. They all came back alright, but they had to pay dearly for their bit of fun. One was fined £6 and 20 days detention as soon as we land [when they reached the UK], which was the heaviest fine, and the lowest was 14 days detention.

The letter finished as Private O’Day reached Perham Downs, Salisbury in a bitter English winter.
His group of reinforcements reached France in January 1917. In February he was hospitalised with mumps and then in April he was hospitalised again, this time with tonsillitis. He did not rejoin his unit until early May. He was appointed lance corporal in the middle of July 1917 and by the end of September he was dead.

2 Australian Pioneer Battalion was working in the area of Bellewaard, near Westhoek, about 5 kilometres from Ypres. They were engaged in the construction, and repair, of both the tramway and the roads. The roads were being re-surfaced with wooden planks (‘planking’). At the time there were major problems with movement of artillery, troops and all necessary supplies because of the state of the ‘roads’. At the same time, the roads, as bad as they were, were more effective than the light tram rail because it was easier and quicker to repair – or detour round – the road when it was hit by artillery. The traffic was tightly congested and there was constant artillery shelling all along Menin Road. Drivers of both horse/mule-drawn wagons and lorries could be caught on the roads in such barrages with no cover and nowhere to go. There were also attacks from the air.

The war diary entry for 2 Pioneer Battalion on 29/9/17 noted that there was … very heavy shelling of Bellewaarde Circuit Road and that the road was broken in several places. It took 3 hours to carry out the repairs. Tragically, a platoon from B Company was hit by an ‘aerial bomb’ when the men stopped for a drink at a ‘comforts’ shelter on Menin Road. An officer and 6 other ranks were killed outright. Another 19 other ranks were wounded and one other rank – Lance Corporal O’Day – died from his wounds.

L/Cpl O’Day was still alive when they got him to the closest casualty clearing station, where his leg was amputated, but he died the same day. He was buried in the Lijssenthoek Military Cemetery, Lijssenthoek, Belgium.

The cable advising of L/Cpl O’Day’s death was dated 8/10/17. On 14/11/17, the following bereavement notice appeared in the Gippsland Standard and Alberton Shire Representative:

Mr. and Mrs. S O’DAY and family, Darriman, desire to sincerely thank all kind friends for calls, cards and letters of sympathy in their sad bereavement.

The paper (5/4/18), reporting on the annual general meeting for the Yarram Co-Operative Society, noted that the chairman – T G McKenzie – paid tribute to Corporal O’Day, a former employee:

I feel sure I am voicing the feelings of all present when I desire to express on your behalf the deepest sympathy for the relatives of the late Corporal Robert O’Day, who has made the supreme sacrifice for his country. Prior to enlisting he was employed by the society, and was a general favourite of all who knew him.

L/Cpl O’Day’s name is recorded on the honor roll for Darriman state school. It is also recorded on the Shire of Alberton Roll of Honor. However his death is not marked on this roll and his name is not included on the Alberton Shire Soldiers’ Memorial. Given that he was obviously a local, his family had been in the district for so long and he personally was well known, it is surprising that his name was left off the soldiers’ memorial. 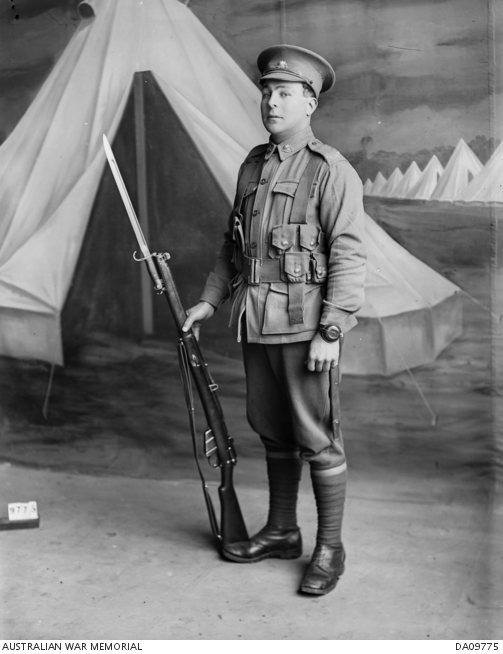