Harold Beecher Chenhall was born in Devon, via Yarram in 1893. His parents – John Egbert (Alf) Chenhall and Elizabeth Hardie Chenhall (Grundy) – had been in the local area since the early 1890s when the father had been appointed as head teacher of the state school at Jack River. By the time Harold enlisted, the family had significant land holdings – nearly 200 acres – at Jack Creek and were involved in dairy farming.

It appears that an older brother – Edric – enlisted before Harold. In fact, he appears to have enlisted twice. The first time was at the very start of the War – September 1914 – and the second in May 1916. In both cases the enlistment was effectively cancelled and the second cancellation, at least, was prompted by concerns that the family’s farm could not function without him. This second episode was after Harold had also enlisted (26/8/15). By this point, presumably, the issue of help for the family farm had become more acute. The arrangement appears to have been that the oldest son stayed to help with the farm and the younger one enlisted.

Harold Chenhall was well known as a footballer (Devon) in the local area. In fact, he had attracted a certain notoriety. In August 1914, he had been involved in a serious on-field clash with another player (C Dessent) in a match between Devon and West Alberton. He was given a 2 match suspension. However the issue was pursued in the local court as well and there is a report in the Gippsland Standard and Alberton Shire Representative (14/8/14) of the case before a police magistrate. B P Johnson appeared for Chenhall and argued that the issue was minor and that both players involved were locals of good character. However, the magistrate was unimpressed. He convicted both of them and fined them £5. The report in the paper makes it clear that the magistrate was very mindful of the recent death of a local player (Post 1) following an injury in another local match. The magistrate was determined to make an example. He noted:

This district was noted for foul football. Only recently a young man lost his life through foul play in this district.

Private Harold Chenhall enlisted as reinforcement for 7 Battalion in Melbourne on 26/8/15. He was 22 yo and single. On his enlistment form he neglected to acknowledge his recent (1914) conviction. He gave his occupation as farm labourer but, presumably, he was working on the family farm. His religion was given as Methodist and, in fact, his name is recorded on the honor roll for the local Methodist Circuit. Next-of-kin was given as his father of Jack River. His father was also sole beneficiary of the will.

The details of Private Chenhall’s early service, immediately after enlistment, are not entirely clear. It appears that in October 1915 he was hospitalised – influenza – in the Clearing Hospital Royal Park. There was more hospitalisation in the first half of 1916. Initially he was in the Clearing Hospital Castlemaine (Feb 1916) and then in August 1916 he was transferred to the Isolation Hospital Langwarrin. This particular medical institution had been set up earlier, in 1915, to treat AIF members being returned home from Egypt suffering from VD. It appears he was finally discharged from hospital for active duty on 1/9/16, just one month before he left for overseas.

In early 1918 he was hospitalised in France and then repatriated to England. It appears that this time it ‘Trench Fever’. The period of hospitalisation lasted from very early January to early April 1918. After this he was taken on the strength of the Machine Gun Corps and then when he returned to France in early June (4/6/18) he joined 5 MG Battalion (7/6/18). This particular unit had only been formed in March 1918.

Private Chenhall was buried at Bayonvillers on the same day, with the Rev. J. A. Jeffreys officiating. The information about the burial and the grave site was given to the family in February 1919 (19/2/19) and, in the same letter, they were advised that a photograph of the grave would be sent ‘when available’. However, for some unknown reason, the grave must have been ‘lost’ because there is now no record of any grave site and, instead, Private Chenhall’s name is recorded on the memorial at Villers-Bretonneux.

There was a long delay in informing the family in Gippsland of Private Chenhall’s fate. The letter informing the family that he had been wounded was not sent until 23/8/18, by which time he had been dead for 2 weeks. Further, the cable advising of the death did not come through for another month (20/9/18). The following letter from the father – written on 28/9/18 – highlights the difficult position faced by the family back in Gippsland from the time they were advised that he been wounded right through to the time they received notice of his death.

Your notice of the death through wounds of our son Pte H. B. Chenhall duly received.
I write to ask you if it possible for you to get any particulars. Would you please do so. The first notice of No. 6482 Pte H. B. Chenhall being wounded came Aug 23rd & then the death notice not till Sep 20th. We feel it hard not to know anything further & would be thankful for any news you could get.

As indicated, there was a letter in February 1919 with some additional details. Unfortunately, as matters transpired, this letter gave incorrect information about the grave site.

News of Private Chenhall’s death appeared in the Gippsland Standard and Alberton Shire Representative on 25/9/18:

Deep sympathy was expressed for Mr. J. E. Chenhall and family on Saturday when it became known that his gallant son, Corporal (sic) Harold Chenhall, had died of wounds. A short time ago he was reported wounded, and hopes were entertained that his condition was not serious, but as his death took place on 12th Aug., we are informed that he did not last long after being carried from the battle front. Harold was a friend of everybody in this district, a keen sport, and a prominent member of the Devon football Club. He died the glorious death of a soldier at the age of 25 years. He was about two years at the front.

There was a delay with the return of Private Chenhall’s personal effects and when by April 1919 the father had not received them he wrote to the AIF suggesting that he would have to take the issue up with his local MHR. He received a reply in early May (6/5/19) that pointed to the shipping difficulties of the time,

It is pointed out that owing to the lack of shipping facilities, considerable delay has been experienced in the despatch of effects from overseas. Large consignments are now coming to hand and should any of your son’s property be included same will be promptly transmitted to you.

In late May the package finally arrived:

I am enclosing receipt for 1 package received. There is no mention of his watch.
He had a wristlet watch presented to him when leaving, and you will understand we are anxious to get anything in the nature of a present.
Hoping that it will come to hand…

There is no record of the missing watch being returned to the family. Sadly, in the end, the family was left with no grave and no keepsake.

Harold Chenhall’s name is recorded on both the Shire of Alberton Roll of Honor and the Alberton Shire Soldiers’ Memorial. It also appears on the honour roll for Stacey’s Bridge as well as those for the Yarram Club and the local Lodge (207). 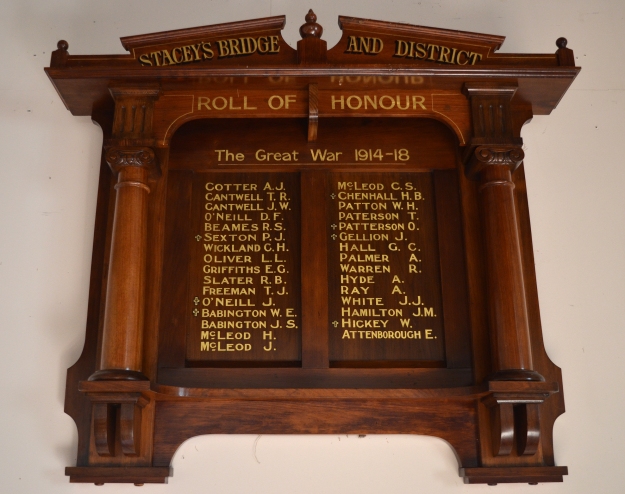