At least 3 siblings from the Goodson family were farming in the Alberton West district of the Shire of Alberton from 1900. The brothers came from a large family of 13 children. The mother – Isabella Horner – died in 1901 and the father – James Charles Goodson – in early November 1915. Both the electoral roll and the rate book for the Shire indicate that in 1915, 3 Goodson brothers – George Ernest, Joseph and John Charles – were farming several properties, which totalled about 200 acres, in the district of Alberton West. There was another sibling – James Charles – but he did not appear to have land in his name. Of these 4 siblings, only George, the youngest, enlisted.

George Ernest Goodson was born in Beenak in 1879. It appears that he went to school at Rosstown. He would have been in his early twenties when he moved to the Shire of Alberton.

George was single and 37 yo when he enlisted. His religion was given as Church of England. He had his first medical at Yarram with Dr Crooks on 17/8/15 and was then re-examined in Melbourne on 28/7/15, the official date of his enlistment. He joined as a sapper in 4 Australian Tunnelling Company. He returned to the district on final leave and there was a formal farewell for him in November 1915. He was presented with the shire medallion. The farewell was reported in the local paper – Gippsland Standard and Alberton Shire Representative – on 24/11/15:

The short report concluded with ‘Private’ Goodson thanking all those there … for the kind reception and representation and [he] hoped to see his friends again at conclusion of the war. (Applause).

Sapper Goodson’s father had died just a few weeks prior to this farewell. He left for overseas service, from Sydney, on 22/5/16, nearly one year after enlistment. He reached England in July (18/7/16) and moved across to France one month later (29/8/16), now in 1 Australian Tunnelling Company. There was brief period of hospitalisation in December the same year for myalgia.

Sapper Goodson was killed on 13/6/17, one week after his unit had featured in the coordinated detonation of mines under the German lines at the very start of the Battle of Messines. He was killed by artillery fire. He was one of a party of about five men who were unloading stores near the Lille Gate in Ypres when a shell exploded nearby, killing him and at least two others. The relevant entry in the war diary of 1 Australian Tunnelling Company contains only a cryptic reference on 13 June: 3 men killed 1 man missing. However, there is more detail in several witness statements.

He was one of a party of 5 unloading a lorry when a shell burst among them killing the lot. I saw it happen at Ypres at a place we called Lille Gate. He was buried under shell fire the following day at a military cemetery near Ypres. A cross marks the spot which is in a bad place. He came from Victoria to Rosebury Camp Sydney with me and we left Sydney together in the Warilda on 22nd May 16. I knew him real well.
Sapper A.A. McDonald 1st Tunn. Coy. 22/10/17.

He was killed by enemy shell fire in Ypres on the 13.6.17. His body which was not disfigured was immediately recovered and was buried during the following night at the Railway Dugouts Soldiers’ cemetery near Zilebeke by a minister of the Church [Church of England] he belonged to.
Lieut. R.M. Justice 1st Aust. Tunn. Coy 3.11.17

Another witness statement throws some light on Sapper Goodson’s work in the tunnelling company. According to Sapper Mclean (19/11/17) Goodson was one of the unit’s cooks. The statement also explains why he was there that day near the Lille gate.

He was one of our cooks. He was killed about a week after our mine went up at Hill 60 on June 7th. While we were working at Hill 60 our cooks were stationed near Lille gate and were a sort of half-way house for us when we went out to rest. They remained a few days after we had moved and it was then that a shell came over, knocking out two or three of them and killing Goodson outright.

Sapper Goodson was buried in the Railway Dugout Cemetery and it appears that there was a funeral service and the grave was recorded and marked in some way. However the German shelling was so intense in that area that the cemetery itself was churned up. Correspondence to the family in 1925 indicates that, despite every effort, the exact location of the grave in the cemetery could not be pinpointed. As a consequence, his name was recorded on a ‘collective cross’ that was placed in the general area of the cemetery where it had been determined that the original grave had been.

The cable advising of the death was dated 18/6/17 and the formal report of death was completed on 27/6/17. The news reached home to West Alberton in early July. It was reported in the local paper on 4/7/17:

The sad news reached Mr. Chas Goodson West Alberton, on Monday, of the death of his brother, Private George Goodson, who in fighting for his country was killed in France. Private Goodson will be remembered as a keen follower of cricket, and whose performances with bat and ball will live long in district sporting annals. His many friends will regret to hear of his demise.

There was a further tribute published on 11/7/17. It related to his involvement with the local community of Hiawatha:

The sad news has reached us that Private G. E. Goodson has been killed in action in France. During his residence in this district he was always willing and ready to assist in every function, whether work or sports. As a cricketer he was almost perfect, and his scores and records always ranked with the leading and professional “sports.” With the rifle he was always there, and ready to encourage young shootists. As a member of the hall committee he always spoke up and gave his ideas on various subjects. His pleasing manner won for him a great many friends, who will greatly miss him in all walks of life.

Sapper Goodson’s identity disc was returned to his sister – as next-of-kin – in February 1918 and the few belongings – 1 pr Binoculars in a case, 4 certificates – finally reached the family, but not until August 1920. The siblings agreed that the war medals were to go to Joseph Goodson. They also noted that this brother had been ‘the one most inconvenienced through the enlistment of George’. Presumably, this was a reference to the work and responsibility that Joseph had had to pick up in relation to the farm.

The information for the (National) Roll of Honour was provided not by the immediate family but by a cousin – Joseph Henry Falkingham MM of Windsor – and another local farmer from Alberton West, Thomas James McGalliard. The actual information provided was sparse but it did identify Alberton as the location with which he was ‘chiefly connected’. Sapper Goodson’s name is featured on both the Shire of Alberton Roll of Honor and the Alberton Shire Soldiers’ Memorial. Additionally, an article in the local paper (14/11/17) indicated that an enlarged photo of Private (sic) Goodson had been hung in the hall at Hiawatha. 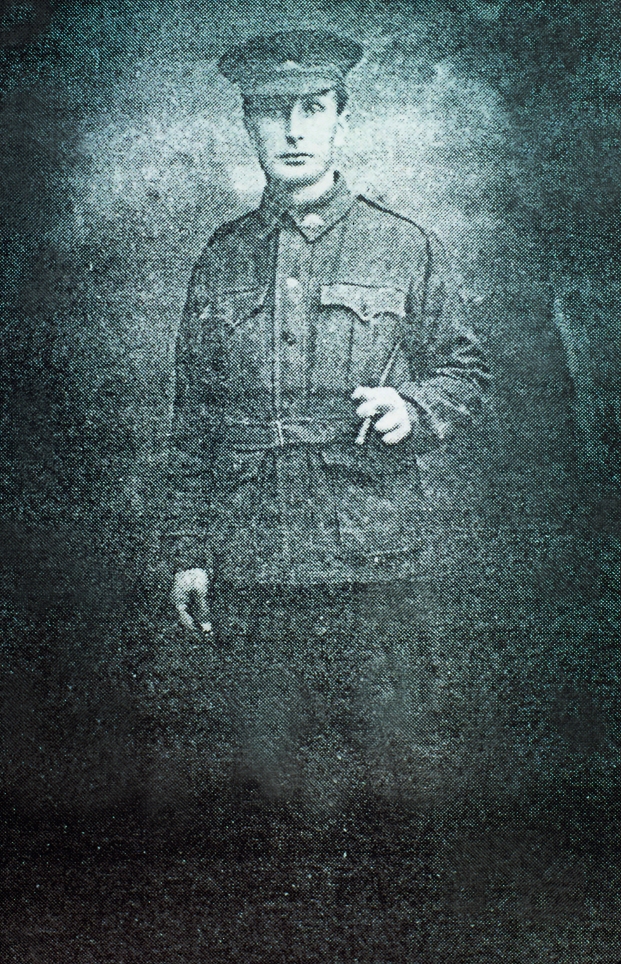