Edgar John Appleyard was born in Alberton in 1888 and grew up in the district. He attended the Alberton State School. He was a cousin of the six Appleyard brothers, also from Alberton, who enlisted. Two of these cousins (Gordon William Appleyard and Charles Courtney Appleyard) like Edgar, died on active service. Edgar Appleyard had 2 brothers, one of whom – Frank Appleyard – also enlisted, and survived the War.

Edgar Appleyard’s father – Arthur Horatio “Crib” Appleyard – had been the Shire Engineer for the Shire of Alberton. He had died in 1898. The mother – Mary Ann Appleyard – was listed as next-of-kin on the enlistment forms. When her son enlisted her address was given as Alberton but she changed address several times from that point and, at the time of his death, she was living at Windsor in Melbourne.

Edgar was nearly 24 yo when he enlisted and he gave his occupation as ‘labourer’. The father had held land in the local area but there is no indication that, after the father’s death, the wife or sons held land and were farming. Presumably, Edgar was working on other local properties as a farm labourer.

He enlisted in Melbourne, early in the War, on 20/10/14. He was single and he gave his religion as Church of England. It appears he nearly failed the medical because of poor teeth. He was taken on in the newly formed 8 Light Horse Regiment.

His unit left for Egypt in February 1915 and was involved in the fighting at Gallipoli from mid May. 8 LHR was involved in the disastrous attack on the Nek on 7 August 1915. At the end of October Trooper Appleyard was hospitalised for a week. He was returned to duty but after only a few days was hospitalised gain. This time he was taken off the peninsula, transported to Alexandria and admitted to hospital in Heliopolis with ‘debility’. By the time he rejoined the unit in mid December the Gallipoli campaign was effectively over.

On 19 April 1917, 2 years after arriving in the Middle East, Trooper Appleyard was wounded in action. The wounds were serious and he subsequently died of them in early August (3/8/17).
The action in which Trooper Appleyard was wounded was the second unsuccessful attack on Gaza. The war diary of the 8 LHR recorded 6 killed and 67 wounded in the action on that day (19/4/17). The diary also made a point of explaining how the use of two armoured cars in the operation increased the number of casualties. The 2 armoured cars were driven to an advanced position in the Australian lines and, not surprisingly, drew intense enemy fire thereby increasing the number of casualties. The diary was dismissive of the overall value of the armoured cars, both of which were easily put out of action by the enemy, but not before one of them had run over and seriously injured an Australian trooper.

There is an additional reference in the diary that might be highly relevant to trooper Appleyard’s fate. Essentially, the diary notes that the regiment was at that time using the new ‘H. K. Auto Rifles’ – Hotchkiss M1909 – and while this light machine gun had proved ‘invaluable’ it had also been responsible for deaths and injuries amongst the Australians themselves. Poor training in its use had meant that in some cases it was being fired from the shoulder, with deadly consequences for those nearby. There is the possibility that Trooper Appleyard, whose wound was described as a gunshot wound to the back, was in fact the victim of ‘friendly fire’.

Trooper Appleyard was transferred to hospital in Cairo via various casualty posts. He reached there on 24/4/17, 5 days after he had been wounded. It appears that his mother back in Australia learnt of his serious injury by cable on the 26 April. He was described as ‘dangerously ill’. He lived for more than 3 months and over this period there were at least 10 further cables back to Australia to advise that he remained on the ‘dangerously ill list’. There was one cable early on (5/5/17) that advised that he was ‘out of danger’ but this was definitely the exception. The following letter makes it clear that from the start there was no chance of survival. It was written in September 1917 by the Registrar of the hospital in which Trooper Appleyard was nursed and died (14 Australian General Hospital, Cairo). It was written in response to a Red Cross appeal for information on Trooper Appleyard’s death and, presumably, the contents, in some form or other, would have been forwarded to the mother.

I have to state that this soldier [Trooper E J Appleyard, 609] was wounded on the 19th April at Gaza by a rifle bullet which entered the spine and injured the spinal cord, causing complete paralysis of the lower limbs immediately.

He was admitted to this hospital on the 24th April in a paralysed condition and his general condition was naturally serious from the start. The damage to his spinal cord was irreparable, and there was never any prospect of his recovering or of his being sufficiently strong to travel to Australia on a hospital transport.

He lived until the 3rd of August growing progressively weaker all the time. During these months he was always cheerful, was a great reader and wrote a large number of letters. He was entirely free from pain and never made any complaint, and his death was a gradual and very easy one….

Trooper Appleyard’s file contains extensive medical notes, including a post mortem report, which make for graphic reading. In a sense, this material is the medically objective – and far more confronting – version of the letter written by the Registrar, who was presumably trying to give some sort of comfort and our modern day sense of ‘closure’ to the family. The post mortem gives as the cause of death … GS wound of spinal cord – myelitis and Septic cystitis & extensive bed sores. The bed sores were described as … large deep excavating bed sores on buttocks extending to the sacrum. There were similar lesions on the heels. The medical notes reveal the ongoing, but ultimately unsuccessful, attempts to control infection in the bladder. They also indicate that the patient was being treated on a water bed.

The mother was advised by cable within two days of her son’s death. His funeral service was conducted by Chaplain Captain E Warren Tompkins and he was buried in the British Military Cemetery, Cairo. Uncharacteristically, there is no record of any personal kit being returned to the mother.

Death notices appeared in the Gippsland Standard and Alberton Shire Representative on 15/8/17:

A call to duty, ’twas nobly done,
In doing his duty a crown he won:
No fear for self, in trying to save
The lives of others his life he gave.
For him, our gallant hero,
We breathe a silent prayer:
We love and honour his noble name,
We know he is in God’s care.

Though Thou hast called me to resign
What most I prized, it ne’er was
mine,
I have but yielded what was Thine:
Thy will be done.

Ironically, these notices of his death appeared just 2 weeks after the local paper had encouraged locals to write to Trooper Appleyard in hospital in Egypt. The mother by this point was living in Melbourne and it appears that it had taken time before people in the district knew that he had been wounded and that his condition was so serious. The information appeared in a short article on 1/8/17, just 2 days before he died and, obviously, far too late for his benefit:

On 7/9/17 the local paper published another article on the death of Trooper Appleyard. It is worth reproducing in full because it shows the incredible paths that information on serving soldiers could take to reach the family back in Australia. The episode also shows the power of the local paper to present the narrative of the War, at the immediate level of individual soldiers, including those who as locals had until recently lived among them. The lessons from this particular section of the narrative are all about kindness, compassion and courage:

Tribute To A Brave Soldier
Mrs M. A. Appleyard, Windsor, has received the following letter from Private T. P. Payne, Melbourne, referring to the death of her son: –
Dear Mrs. Appleyard. – You will please pardon me intruding upon you at this time, but you will understand my reasons when I tell you that it is my great admiration for a gallant gentleman and sympathy for his loved ones that impels me to write you. By the last mail from Egypt I received a letter from my brother who is attached to the staff of the 14th A.G.H. In it he states: “I am now engaged in attending a very serious case. It is a laddie named Appleyard, who comes from Albertan, near the Lakes. He was wounded on 19th April at Gaza, and since that time has been partially paralysed from hips down. The injuries are most serious, and it takes us an hour each day to dress them. “Appy” is the gamest boy I have ever seen, and although his case is helpless he is always laughing and joking whilst we are dressing him; never a word of complaint escapes his lips. Just as I am writing (2.15 a.m.) he is sitting up in bed as happy as can be puffing a cigarette. His chief thought is of his home.” I might tell you my brother was very fond of him, and I’m sure nothing that his mind could suggest would be omitted to comfort and cheer your boy. Jim used to go to Cairo every chance to get sweets, etc for him. In another letter he described the bed upon which your lad was, and it will surely interest and somewhat console you to know that all that science and goodness could produce was at his disposal. Jim says: “In bad cases water beds are used – that is an india-rubber mattress is filled with water; his hips are on an air cushion, and he is packed up up in the most convenient way with pillows.” It is indeed a very sad duty to write you in this way, but I felt it would be somewhat of a comfort to hear from a stranger of the wonderful courage of your son. I do trust that you are bearing your sorrow with a spirit as brave as that of your boy. I am sure that you all are, and you in particular. If you should care to correspond with to my brother I am enclosing his address, and I am sure he will be as happy to serve you as he was proud to assist your gallant soldier son. Once again I ask your pardon for intruding myself.

Trooper Appleyard’s name is included on the Alberton Shire Soldiers’ Memorial in the main street of Yarram. His name is also included on the Shire of Alberton Roll of Honor, but, inexplicably, the entry does not mark his death on active service. 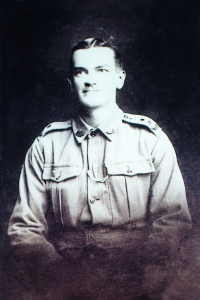