(19th July) Bombardment on both sides during the day. Assault launched at 6pm. Enemy’s position captured & an attempt made to consolidate during the night. …
(20th July) Both flanks were broken & a general retirement to our original lines necessary. Casualties very heavy. Btn withdrawn from front line and re-billeted in FLEURBAIX.

There was also a more detailed report which highlighted the following: the casualties caused by the Australian and British artillery falling short on their own lines; the lack of command as the result of high casualty rates among the officers; the lack of materials – sandbags, shovels, picks etc- that could be used to make captured positions safe from enemy fire; the incorrect intelligence on the disposition of the German lines and defences; the devastating effects of German enfilade artillery and machine gun fire; and, pointedly, the impossibility of defending and holding the forward positions that had been taken, particularly after the flanks gave way.

To sum up under the hellish concentrated enemy fire the battalion did magnificent work in capturing and holding the positions for so long without reinforcements and necessary material to consolidate captured works, and it was only on the breaking of both flanks that it was finally forced to retire to its original attacking position.

The CO’s account of the last part of the action – the withdrawal to their own lines – was particularly graphic:

The retirement of both flanks had left us up in the air and it was apparent that we would have to retire. At 5.45 a.m. the remnants of our troops broke and retired and it was impossible to restrain them although an attempt was made to keep them at the point of the revolver. The C. O. was the last man to leave the enemy’s trench.

The enemy then swarmed in and the retirement across no man’s land resembled a shambles, the enemy artillery and machine guns doing deadly damage. Our own lines were reached at last, but the artillery bombardment was intense and even under shelter of our own trenches the casualties were awful.

Harold Mates was born at Nyora, South Gippsland. He attended both Welshpool State School and Carrajung South State School. In July 1917, on Arbor Day, there was a tree-planting ceremony at Welshpool SS in honour of past students who had been killed up to that point in the War. The report of the event in the Gippsland Standard and Alberton Shire Representative (13/7/15) noted that the first tree planted was … in memory of Harold Mates, the first to fall. His name is also reported on the honor roll for Carrajung South SS. It appears that the family must have moved again because there is another reference (Gippsland Standard and Alberton Shire Representative, 23/816) to the father as a resident of Traralgon.

There was a brother – Roy Mates (1081) – who had enlisted earlier (August 1914) but his name is not included on the Carrajung South SS Roll of Honor.

It is difficult to uncover his movements round the time of his enlistment in July 1915. When his wife completed the information for the (National) Roll of Honour she gave his ‘calling’ as clerk in the National Bank, Melbourne. Yet he enlisted (21/7/15) in Brisbane. Moreover, when he enlisted he was single and gave his next-of-kin as his father – Richard Mates, Kyabram – but he must have married – Dorothy Edith Mates, nee Barnett – prior to embarkation for overseas service. Further, pension details in his file show that there was a daughter, Gladys Elizabeth Mates.

One version of events is that the marriage took place in Melbourne some time after early October 1915. This was when the part of 31 Battalion formed at Enogerra in Queensland moved to Broadmeadows and merged with the part of the same battalion formed there. The merged 31 Battalion then embarked from Melbourne for overseas service on 9/11/15 which meant that there was one month for the marriage. However, the embarkation roll still showed Harold Mates as single, with his father as next-of-kin. Possibly there had not been time to change the record. The wife’s address was the suburb of Camberwell.

At the time he enlaced, Harold Mates was 24 yo ands he gave his religion as Roman Catholic.

When in Egypt, Private Mates had several run-ins with military authority. In April 1916 he was charged with failing to report for duty and received 2 hours pack drill as punishment. In May, it was ‘breaking out of ranks without permission’ and the punishment was 24 hours F. P. No. 2. Finally, again in May, he was charged with being ‘(1) absent from parade’ and ‘(2) refusing to obey an order given by a superior officer’ and received a very punishing 168 hours F.P.No. 2. It was certainly not uncommon for those in the AIF to be charged for breaches of military discipline, but 3 charges in such a short period time would have drawn attention.

Private Mates was killed less than 1 month after landing in France.

Private Mate’s body was recovered after he was killed in action on 20/7/16. There was one reference to him as ‘missing’ from 19/7/16 and another to the effect that he ‘died of wounds’ but both of these were corrected to ‘killed in action’ on 20/7/16. He was buried at Eaton Hall Military Cemetery, Croix Blanche near Armentieres. Rev. G Cranston, who was attached to the battalion, officiated. Subsequently Private Mates was re-buried in the early 1920s at Rue-Petillon Military Cemetery, Fleurbaix.

The Report of Death was issued on 11/10/16. Personal items – Identity Disc, Religious Book, 2 Photos, 4 Coins, Book, Pencil, Religious Medallion –  were returned to the wife in June 1917.

Henry Willis was born in Alberton. He grew up in the Shire of Alberton and attended Alberton State School. At the time of enlistment his father was dead and so his mother wrote the formal parental permission for him to enlist. He was 19 yo and his occupation was listed as farm labourer. His religion was given as Presbyterian.

Alberton 10/7/15
Dear Sir
I am quite agreeable that my son may enlist for active service abroad.
Janet Willis

Private Willis had a medical examination in Yarram on 12/7/15 and then he completed his enlistment in Melbourne on 14/7/15. He joined 31 Battalion (D Coy) and left Melbourne for overseas service on 9/11/15, just 2 months after enlistment. After nearly six months in Egypt, the battalion left for the Western Front in June 1916 and reached France on 23/6/16. Like many others, Private Willis was killed less than one month after reaching France.

The local paper – Gippsland Standard and Alberton Shire Representative – carried a report on 25/8/16 that Private Willis was listed as missing.

The interesting feature in relation to Private Willis’ death is that the date of death is recorded as the 21 July. This is incorrect. There is sufficient documentary evidence to show that he was first reported ‘missing’ as of 20/7/16. Further, he appears on a German list of the dead as having been killed on ‘19/7/16 near Fromelles’. Additionally, eye-witness accounts prepared for the Red Cross make it clear that he was killed during the Battle of Fromelles – 19-20 July, 1916 – not the day after.

The following advice to the Red Cross was written on 5/12/16 by Private Albert Edmund Hickson MM, 872, 31 Battalion:

I knew Willis. He was in the same tent as myself. He was a stout fair man about 21. He came from Yarram Gippsland Victoria. He was killed at Fler Bay [sic] in No Man’s Land. I saw his body about 12 hours later lying dead. We had to retire and leave our dead there.

Informant states that on 19th July at Fleur Baix Willis was shot through the jaw. He was in same Machine Gun Section as Informant, but they were not together at the moment. He thinks that Pte. Ellis (nickname Paddy) is likely to know particulars.

Overall, there is no doubt that Private Willis was killed in the actual battle and not on the 21 July. It appears that the incorrect date was entered very early in formal records and then it effectively became ‘locked in’. The incorrect date probably explains why his name does not appear on the memorial in VC Corner.  Instead, it is recorded on the memorial at Villers-Bretonneux. However, this is all somewhat academic as Private Willis’ body was one of those identified by DNA testing (2009-2010) and has been re-interred at the new Pheasant Wood Military Cemetery at Fromelles in an individual plot. The date of death on the headstone is given as 19-20 July.

When the family in Gippsland received the reports from the Red Cross in February 1917 they wrote to Base Records, Melbourne (15/2/17) requesting contact information for Private Ellis who had been mentioned in the statement by Private Rogers.

Enclosed is letter we received from the Red Cross.

We would like to apply to Pte Ellis for further information. Will you kindly supply us with Ellis’ number & initials. You would greatly oblige. Thanking you in anticipation.

Such individual effort by the family to track down information about the death of the son was very common.  As well, in many cases soldiers from the same town or district back home would write to the family informing them about the death. The overall effect was that even though a formal notification of the death had not been received, the family often knew that their son had been killed.

In this instance, the response the family received from Base Records revealed that the AIF itself did not have access to the Red Cross information.  It undertook for the family to follow up the witness statement made by Private Hickson:

I have to acknowledge the receipt of your letter dated 15th instant, with enclosure from Red Cross regarding No. 983 Private H.V. Willis, 31st Battalion, and to inform you the address of Private Ellis referred to therein appears to be:- [address supplied]

As it is noticed Private A. E Hickson gives a definite account of the fate of Private Willis, a cable message is being despatched to London with a view to obtaining confirmation of his report if correct. The reply when to hand will be promptly transmitted to his mother.

The irony is that by this point the name of Private Willis was beginning to appear on the death lists provided by the Germans. The first instance appears to have been on 4/11/16, which was at least two months prior to this series of communications and it is hard to see why the information had not been processed by then.

The Report of Death of a Soldier was finally issued on 28/3/17 and the identification disc, returned by the Germans, was sent to the family in June 1917. There is no record of any personal kit being sent to the family.

There is one final factor that made this particular death even more distressing for the family. A brother, David Geoffrey Willis, had enlisted at the same time as Henry. In fact, there were 4 brothers who enlisted. David was 5 years older and married with three children. Tragically, he died at the Alfred Hospital within six weeks of enlistment from ‘cerebro spinal meningitis’. The family lost two sons within one year.  Both brothers are featured on the Shire of Alberton War Memorial.

See this ABC report for the link between a good luck charm belonging to Private Willis and the success in locating the Australian bodies in Pheasant Wood, Fromelles. 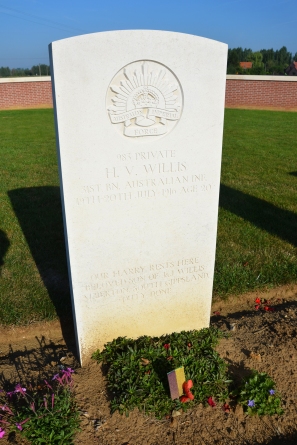